“I am tired to handle this mining train that passes in front of my house ten times a day. I am tired of listening to this convoy of 300 wagons taking away the wealth of our land and leaving behind a trace of death and deadly accidents: one person dies every month on the train tracks! I am fed up with the white collars discourse: they guarantee that this is going to bring us progress but, for us here, everything has been stopped for more than 20 years!”

This outburst reflects the situation of several families who live in the areas by the ‘Carajás corridor’ – a 559 mile railway that crosses the state of Pará and Maranhão, in the north of Brazil. Here the giant Vale do Rio Doce (Vale) dominates the economy and controls regional politics by exerting monopoly over the richest and most abundant iron mines in the world and also by controlling a vast transportation system that includes miles of railways and an immense fleet of cargo ships. 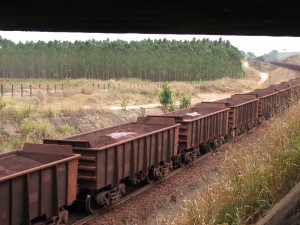 Vale is the second largest mining company in the world, operating in 30 countries. The company, originally owned by the state, has grown 19 times since its suspicious privatization, which transferred a national treasure to private interests. Vale disguises itself in green and yellow, achieving sustainability and social responsibility standards through powerful propaganda and influence over political parties. On the opposite side, peoples and communities in various parts of the world witness labor conflicts (3,500 people have been on strike in Canada for more than six months), pollution, chemical leaking, corruption of local administrations and even the use of private militias to guarantee the interests of Vale. This is, therefore, a good example of the arrogance of many mining companies in the world.

That is why, since the end of 2007, a network of movements from the north of Brazil has launched the campaign “Justiça nos Trilhos” (‘Justice on Tracks’ – www.justicanostrilhos.org) in order to accuse the conflicts involving the multinational and to claim for socio-environmental justice. Since then, the participation in the World Social Forum in Belém strengthened the network of alliances and the audacity of the campaign, which in 2010 will confront Vale publicly.

The first international meeting of the people affected by Vale will take place next April. Representatives from Brazil, Peru, Equador, Argentina, Chile, Canada, Mozambique, Italy and – possibly – Indonesia will get together for a three-day ‘popular court’, in which they will exchange information, expose to the media the hidden face of the company and interrogate Vale’s directive  board and stakeholders. The Brazilian Network of Environmental Justice (‘Rede Brasileira de Justiça Ambiental’) together with other big and small entities from Brazil will then deepen an important alliance with the Observatory of Mining Conflicts in Latin America (Observatorio de Conflictos Mineros em America Latina) and with international unionist networks from Canada and the US. Right before the event there will be two regional marches – one in Pará-Maranhão and the other in the state of Minas Gerais. This way a better exchange of experiences and strategies may occur between national and international actors involved in all sorts of territorial conflicts.

A precious documentary-film presented in three languages (Portuguese, English and Italian) about the conflicts in the Carajás region will be launched during the event. It will serve as a privileged instrument of accusation and collective consciousness.

In the name of this network we invite Vivat to support us in whatever is possible: the open veins of Latin America need to resume feeding the anemic body of the poor!

“VIVAT Members have been working to combat these injustices…promote human rights of indigenous communities and maintenance of a sustainable environment.” [read…]

Working With Gypsies from VIVAT International on Vimeo.

Clinic on the Go in PNG