The “Justice on Tracks” Campaign is one of the sponsors of the “1st International Meeting of People Affected by Vale”.

Since the beginning of 2009, right after the World Social Forum in Belém, Brazil, we felt the necessity to elaborate an international meeting to focus exclusively on Vale and its socio-environmental impacts in many regions of the world. 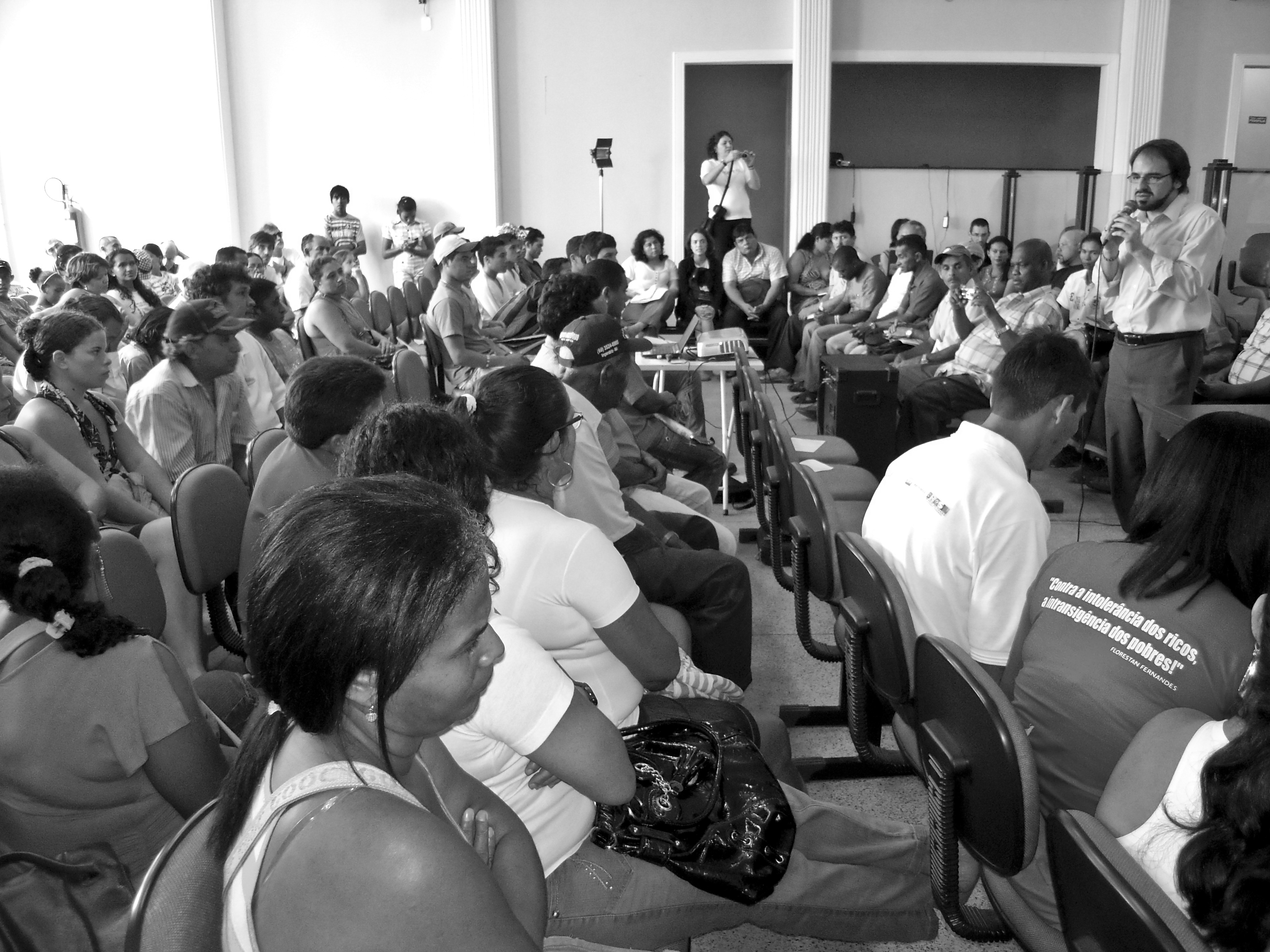 Evident injustice narrated by several communities in Brazil and abroad, the aggressive development model sustained by the mining company and its enormous profits made it urgent to create alternative collective strategies of resistance.

As Combonian Missionaries, we felt directly touched: it was up to us to help the people that we follow in Açaílândia, São Luís, and other small villages along the Carajás railroad, to comprehend the history and the causes of the degradation of their lives.

As we defend life in abundance, we always need to denounce and destroy models that, on the contrary, bring death because of an irresponsible search for profits.

Blessed and encouraged by the 2010 Fraternity Campaign, which stimulates us to study the most evident economic injustices and to compare them with decentralized experiences of popular economy that respect life and the environment, we enthusiastically assume the organization of this new phase of confronting Vale: we dream, together with God, about new ways to relate with the Earth, the natural resources and the whole Creation.

Justice on Tracks, from the beginning, involved the North-East Braziliana province, which supports the campaign and identifies with it. Once more, in this occasion, the participation of Combonians was massive in different preparatory initiatives.

We wrote the magazine “Vale No”, containing many well-informed articles about the evils of the mining company, in special in the Carajás corridor. The magazine supports and complements the artistic work of a well-known Italian movie-maker, Silvestro Montanaro, who made a  75-minute movie about the greatest conflicts and popular resistance along the same region.

Both the film and the magazine will be published soon within the affected communities during simultaneous formation seminars in Pará and Maranhão. Members of the Brazilian Environmental Justice Network and other international partners have already received the material, which is very useful for the formation of their communities and leaders.

Everything was ready for the international meeting. The event was preceded, from the 5th to the 11th of April, by the People’s March in the Vale’s North system.

In partnership with communities, social movements and unions from Pará and Maranhão, we prepared three phases, ready to welcome the public in many countries around the world.

It is impossible to summarize in a few lines the wealth of these encounters (more information is available on the blogs of the event). We managed to rescue the dynamics of reciprocal empowerment that allowed local and international participants to mirror in one another.

In all places, we identified the same strategies from Vale: the conquest of the territory, the marketing to defend a socially and environmentally friendly image, the co-optation of political and judiciary power. In relation to the local leaders, the tendency to manipulate, blackmail and the deliberate intention to divide local communities, threat and criminalize local groups, according to the level of organization of the local resistance groups.

We have also talked about interesting ideas for popular resistance: the effort to give visibility to the conflict (via publications, reports, dossiers), direct actions in opposition to the aggressiveness of the company (land occupation, closing roads, manifests), judiciary actions demanding reimbursement and compensation for environmental damage, production of knowledge adding local knowledge and university research, articulation in networks (international, national and regional), the involvement of key-actors and partners, especially in the judiciary sector.

From the 12th to the 15th of April, the March met with another march, coming from the South System of Vale (states of Minas Gerais and Espírito Santo). There were also many other people, all converging to Rio de Janeiro where the headquarter of Vale are located and where, every month of April, the company holds its annual meeting with shareholders.

In total, there were 160 people, 80 associations and other entities representing 12 countries. It was a unique occasion: for the first time, all the affected people and their leaders systematized their demands and learned with each other.

These were four intense days, in which we studied and improved our collective strategies. Several areas of conflict were identified: the model of development and the robbing of natural resources, environmental conflicts and pollution, labour conflicts and unionist resistance, conflicts with the communities for land, economic conflicts and exaggerate profits (Vale is the biggest company ion Latin America and the most profitable in the world!)

The most important points highlighted in the final document produced in the meeting had to do with Vale’s public image as a socially committed and environment friendly company: the affected people committed to dismantle such image by showing the impacts of Vale in their lives. A detailed report, with 120 pages and 21 specific cases was presented in the Rio de janeiro State Parliament and given to the press and shareholders of Vale.

An international movement became in charge of producing regular ‘alternative reports’ that point out omissions on the annual sustainability report produced by Vale.The alternative reports will trigger new denunciations and will help the mobilization of communities by giving them tools to elaborate better claims in regards to their rights for more sustainable forms of economy and local development.

During the meetings, we also established new potential sources of alliances between communities and missionary provinces in which there are conflicts involving mining and mineral resources: Mozambique, Chile, Peru, Ecuador…

Justice on Tracks will now resume its work in the North and Nort-East regions of Brazil, strengthened by national and international alliances that guarantee strength to the actions in favor of local communities.

As missionaries, we feel demanded to advance in this unprecedented frontier of dialogue between the Church, the communities and the social movements for the preservation of life, dignity and land.