Over the past few decades, the issue of global warming has become a pervasive topic in the discourse among policymakers worldwide. However, climate change talks may be a helpful forum for voicing concerns and ideas, but they have thus far proven to be inadequate in global policy implementation. Fortunately, while the problem of coordinated action remains an obstacle to any large scale agreements regarding Climate Change, some people are taking matters into their own hands to create a sustainable future for the next generations. 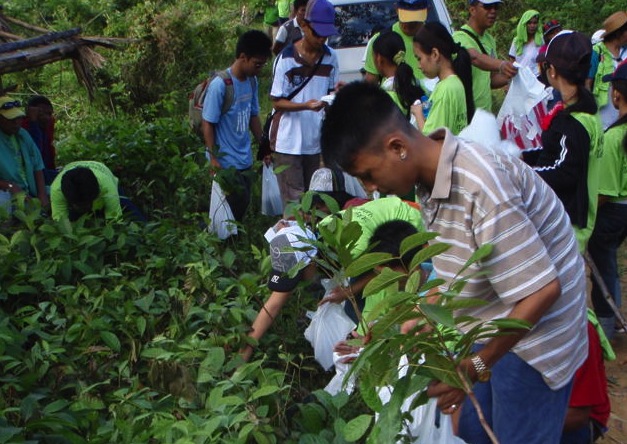 Three years ago, a nine year old boy named Felix Finkbeiner decided to proclaim during a class presentation that he wanted to “plant [a] million trees worldwide – a million in each country!” Initially inspired by the Nobel Peace Prize winner Wangari Maathai and her “Green Belt Movement” and Richard St. Barbe Baker, Felix’s proposal has spawned a student climate change initiative entitled “Plant-for-the-Planet,” that has gained widespread support and popularity. Plant-for-the-Planet gradually transformed itself into a worldwide network for climate justice and it now functions under the auspices of the UN Billion Tree Campaign.

The challenge now is to mobilize children and young people to plant a million trees in their countries during the next three years. One way to publicize this ingenuous project is through the campaign, “Stop talking, Start Planting,” a slogan that Benigno P. Beltran, SVD has taken to heart. Fr. Ben has taken on a Plant-for-the-Planet initiative of his own to counteract the effects of last years’ floods in the Philippines. Typhoon Ondoy, which struck the Philippines during tropical storm Ketsana in September 2009, caused devastating floods and resulted in the destruction of mountain coverage and terrain. The denuded mountains and untended waste left in the wake of the typhoon led to unmanageable water runoff on Mt. Ayaas, causing the Marikina River to overflow. Although emergency relief was disseminated quickly, Benigno, coordinator of the Justice, Peace and Integrity of Creation Secretariat of the SVD Central Province, realized that this would not be enough to secure a positive future for this region of the Philippines.

It quickly became evident that long-term solutions were essential to reconstruction, first and foremost of which was the reforestation of the Marikina Watershed. In light of this long-term approach, Benigno undertook a Plant-for-the-Planet initiative through the Secretariat last December 12, the Global Day of Action on Climate Change with 400 other volunteers. In a letter detailing the Marikina reforestation project, Benigno explains “we hope to nurture thousands of seedlings in the mountain to mitigate climate change, help prevent flooding and keep water in the aquifers of the Marikina Watershed so that people in Manila will have water to drink.” Benigno notes “we would like to ask for your help in making our advocacy known… so that we can raise funds to plant a million trees in the Marikina Watershed and give livelihood to the people in the area so that they will not cut the trees and turn them into charcoal.”

Among the volunteers who made the trek up to Mt. Ayaas to reforest were soldiers and young people, including Children of Mother Earth, an environmental performing arts groups comprised of young people and children who were born and raised in Smokey Mountain, a garbage dump in Manila. Benigno created the group Children of Mother Earth in 1993 to raise awareness of environmental degradation through interpretive dance. Children of Mother Earth perform the dances and rituals of indigenous peoples from the Philippines to spread the message of the need for humans to live in harmony with each other and with creation. The dedication and passion of these 27 dancers in their efforts to “save the planet” through their dancing, has prompted an invitation by Filipino and environmental groups for them to perform a series of concerts in Phoenix, Arizona and San Diego and Los Angeles, California this April.

The Plant-for-the-Planet campaign has mobilized young people all over the world to take an active role in the battle against Global Warming. Benigno has further contributed to this education by encouraging younger generations to understand the interconnectedness of life on our planet. The activities undertaken by children all over the world demonstrate that each person can contribute to the preservation of our environment, for “talking alone isn’t going to stop the glaciers from melting. Each tree [planted] is a symbol for climate justice.”

Through their care for creation, their desire to take responsibility for future generations and life on this planet, and their campaign to “stop talking and start planting,” children all over the world are working towards a sustainable future for all of humanity.  VIVAT International and its members offer our prayers, solidarity, and support to environmental groups such as Plant-for-the-Planet and Children of Mother Earth, who raise awareness about the necessity of environmental justice and inspire people of all ages to take action to mitigate the negative consequences of Global Warming.

“This conclusion is important because it gives Parties a key to unlock other outstanding issues under the two tracks of the negotiations on Long-Term Cooperative Action and in the Kyoto Protocol,” said UNFCCC Executive Secretary, Christiana Figueres. [read…]

The United Nations today launched the International Year of Water Cooperation, which seeks to provide a platform for countries to collaborate in the management of this precious resource in the interest of peace and development. “Water [read…]