On September 24–29, 2012 VIVAT International held a workshop for its members in Indonesia and Timor Leste at the Retreat House of Siloam in Kuwu, West Flores – Indonesia. The workshop was attended by 80 participants mostly coming from the islands of Kalimantan, Sumatra, Jawa, Flores, West Timor, West Papua and Timor Leste. Aside from VIVAT Indonesia members, other participants were a few diocesan priests, laywomen and men as JPIC co-workers at the grassroots level.

The participants were welcomed with a kepok ritual, a welcoming ceremony according to Manggarai custom. It symbolizes the warm acceptance of honorable and special guests as well as a sign of recognition that the guests have entered into and have been a part of Manggarai community

The workshop was enriched with a lively daily liturgy celebrated in accordance with local enculturation. The themes of the liturgy typically reflected the JPIC values such as   life, justice, peace, and integrity of creation, stewardship for creation, mission, gratitude and service for humanity.

In the midst of the busy week of workshop, the participants could enjoy the cultural evening performance organized by SETIA BAKTI High School and IMMACULATA Junior High School. After the cultural event, the community of SSpS Sisters of Perpetual Adoration invited the participants to celebrate Holy Mass and also take supper at their Convent. The VIVAT International workshop event was a kind of “three in one special encounter” gathering all members of Arnoldus Family (SVD, SSpS, and SSpS-AP) and sitting together at the same table of the Lord’s banquet, marked with fraternal and sisterly support for one another.

Highlighting the theme “working for justice, promoting peace, preserving lives”, the participants shared their best practices and challenges in carrying on JPIC work as well as raised focal issues and concerns they faced at the grassroots communities. The issues, among others, included human trafficking, AIDS/HIV, domestic and public violation against women and children, poverty, migrant workers, mining, violation and repression against the indigenous Papuans in West Papua and Dayak People in Kalimantan, deforestation, expansion of palm oil plantation, thrash, water/river contamination, social conflict and on-going slaughters of Papuans. 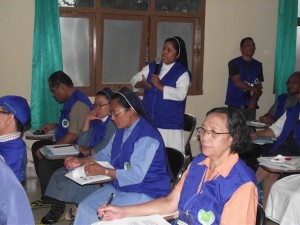 Coping with the issues, the participants have been aware of and were reinforced by inputs of few resource persons about the essential spirituality of JPIC work based on biblical perspectives, social Church Teaching and the spirituality of Kingdom as well as the local wisdom and knowledge of grassroots communities.

The presence and supports of the Executive Team of VIVAT International give a new hope for the participants in advocating human dignity of persons and human rights, including the dignity and the basic rights of women, children and indigenous people in particular through the use of available mechanism and procedures at international forum, the United Nations in particular.

Having been aware of the complexity of the issues as well as considering the strength, opportunities and challenges the participants cope with, three issues are chosen as focus and priorities of VIVAT Indonesia work in the next three years. They are as follows:

In addition, the selected priorities have been clearly articulated in the three years action plan for VIVAT International-Indonesia

VIVAT Indonesia is the first national branch of VIVAT International approved by the Board of Directors of VIVAT International in July 2009. It becomes a Jakarta-based national NGO also which is officially recognized by the Minister of Law and Human Rights Affairs of the Republic of Indonesia on July 31st, 2012. The members of VIVAT Indonesia encompass the 4 congregations of SVD, SSpS, OMI and SCJ.  Yet it has 2,300 members consisting of 11 provinces and 2 regions and working in Indonesia and Timor Leste.

Participants to the VIVAT International Workshop-Philippines sign the official report and statement after a four-day workshop held at Saint Arnold Janssen Spirituality Center in Quezon City. In a statement, the group says they renewed their commitment to uphold human rights, seek justice, promote peace, and preserve the integrity of creation. [read…]