Forty-four members of religious organizations and their lay partners all over the Philippines renewed their commitment to uphold human rights, seek justice, promote peace, and preserve the integrity of creation through the workshop of VIVAT International which took place from Nov. 26-30,2012.

Eduardo Vasquez, assistant program coordinator of the Justice, Peace, and Integrity of Creation (JPIC) of the Oblates of Mary Immaculate, said the birth of VIVAT International in the country signals the beginning of intensified efforts to defend or protect human rights and to give voice to the ‘poor’. 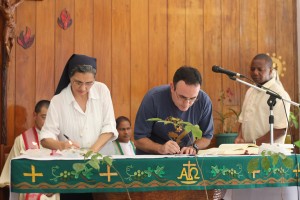 In a statement, the group said they gathered together to learn how advocates of VIVAT International carried out the ministry or advocacy on justice, peace, and integrity of creation in their missions. From these stories, the group identified major issues, which confront the country and its people.

“Inspired by the inputs and motivated by the vision and mission of VIVAT International, we renew our commitment to uphold human rights by working towards the eradication of poverty; restoring the rights of indigenous peoples; preserving creation; promoting sustainable development; and working for structural and political change,” said the group.

Participants to the VIVAT International Workshop-Philippines sign the official report and statement after a four-day workshop held at Saint Arnold Janssen Spirituality Center in Quezon City. In a statement, the group says they renewed their commitment to uphold human rights, seek justice, promote peace, and preserve the integrity of creation. 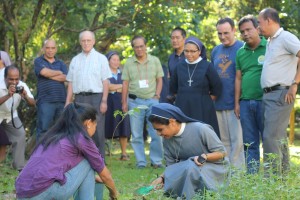 The parenting of trees would affirm the integrity of creation

As one of the highlights of the workshop, they planted three seedlings, which symbolize the birth of VIVAT International-Philippines. The three seedlings also represent the islands of Luzon, Visayas, and Mindanao, which stand for unity despite the diversity of cultures and history of different peoples.

Vasquez said the support of VIVAT International team “gave them the courage to stand for the rights and respect the dignity of each person, especially those of women and children at the grassroots level.”

Inspired by all the inputs and motivated by the vision and mission of VIVAT International to seek justice, promote peace, and preserve the integrity of creation, we renew our commitment to upholding human rights by working towards the eradication of poverty, restoring the rights of indigenous peoples, preserving creation, upholding sustainable development and working for structural and political change. [read…]

All the Provinces reported on their JPIC activities. Included in their reports were the following topics: HIV /AIDS treatment, prevention and rehabilitation; Street Children; Rights of Indigenous Peoples; Land alienation and tribal lands; Children; Women; Domestic/Migrant Workers; People affected by leprosy; the Physically and mentally challenged individuals; and Rag Pickers. Additional reports were given on initiatives for income generation, vocational training and the conflicts in the Middle East (Palestinian Rights), Bangladesh, Sri Lanka and Indonesia. The reports stressed the importance of networking both with non-governmental organizations (NGOs) and the governments for the rights of the people. [read…]