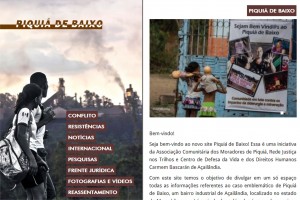 The alarming case of Piquiá de Baixo community, in Brazil, newly appeals to the world’s solidarity. Piquiá de Baixo is the industrial district of the municipality of Açailândia, in the state of Maranhão; for more than two decades the people survive there amidst five pig iron plants and the iron ore mining operations of the Brazilian company Vale. The community of about 350 families is seeking resettlement for several years in a new area free from pollution. Piquiá de Baixo impacted by mining operations creates website to visualize their struggles.

The case of Piquiá de Baixo attracted the attention of Human Rights organizations in other states of Brazil and in other countries. A research by the International Federation for Human Rights, in partnership with the organization Justiça Global and the network Justiça nos Trilhos, resulted in a report published in May 2011 denouncing the impacts suffered by the community .

A campaign by the International Alliance of Inhabitants gained the support of people from over 60 different countries.

The community of Piquiá de Baixo is building alliances and exchanges with other communities victims of pollution caused by the mining and steel cycle: Santa Cruz-RJ in Brazil, Taranto in Italy and El Hatillo in Colombia.

The international solidarity is very important to the community’s struggle and to the affirmation of the right to housing and a decent life.

To strengthen these alliances and seek new partnerships, a site that gathers information about conflicts and resistances in Piquiá de Baixo was created. It is an initiative of the Piquiá Residents Association, the network Justiça nos Trilhos and the Center for the Defense of Life and Human Rights “Carmen Bascarán” in Açailândia.

The website is not only a database, but it aims to be a space that encourages discussion and reflection on the right to housing and environmental issues.

The “International” section is for the public that accompanies and supports the work  of the affected community in other countries. The website features a wealth of information in the following languages: English, Spanish, Italian and French .

The official website launch was held yesterday (26) in the city of Açailândia, Maranhão, Brazil. Through this initiative, the residents of Piquiá want to break geographical barriers, widely publicize their cause and urge international solidarity. The website provides information in five different languages.