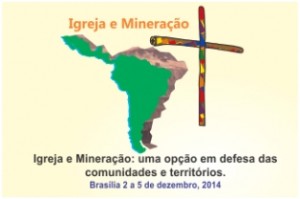 This year in Brasilia, Brazil, representatives of VIVAT International came together with representatives of partner organization from 13 countries both religious and lay backgrounds to participate in the “Churches and Mining” in Latin America meeting. The meeting, which has been co-organized and co-convened by VIVAT since 2012, sought to both strengthen the coordination between active ecclesial communities in Latin America and promote a space for dialogue on mining between people on the ground and the hierarchies of attending churches. This year’s meeting took place from December 2nd to December 5th and gathered participants who are committed to counter-acting the expansion of mining and the burdens it places on indigenous people, the poor, the marginalized, and the environment.

The mission of VIVAT International has been greatly advanced by participation in the Churches and Mining network. Most importantly, collaboration with the group has created an effective way for VIVAT International to connect its mission at the UN to not only individual activists, communities, and groups participating in the process, but also to the collective process of grassroots analysis and priority setting. The Church and Mining group has helped to further this relationship for its part, having twice ratified its specific interest in working with VI along with other international advocacy groups. In addition, VIVAT’s ongoing connection to the mining group has shaped VIVAT’s understanding of the problem of extraction in the region from the perspective of the most affected communities and allowed it to provide urgent and ongoing advocacy support to several groups. Echoing the fruitfulness of this relationship, the mining group continues to see the value in international advocacy and lamentation for its grassroots struggles and believes VIVAT International is a unique partner among the international observers because of its human and environmental-rights focus.

At the conclusion of the conference, participants identified several common objectives including: the need to sensitize society and various churches to the realities of people on the ground, the need to facilitate greater communication in order to more effectively share grassroots stories, the need to inspire greater collaboration between the mining group and other stakeholders (including governments and other religious groups). All participants agreed that these objectives require both great attention and immediate action. The final declaration of the meeting also reinforced the group’s commitment to: “continue promoting international networks for dialogue, advocacy, and denouncing violations, in coordination with other religious actors such as: Franciscans International, VIVAT International, Mercy International, CIDSE, the Pan-Amazonic Ecclesiastic Network, and the Pontifical Council of Justice and Peace as well as the Latin America Mining Conflicts Observatory (OCMAL) and other social expressions that share our common purposes and visions for the continent.”

Speaking on the experience as a whole, meetings like these are vital to VIVAT International’s mission. By listening to these grassroots actors, VIVAT membership learns firsthand about their issues and struggles, allowing them to be on the look-out for opportunities that arise at the UN to connect those people on the ground with an outlet on the international stage.