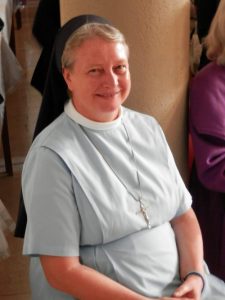 Sr. Veronika was born in Slovakia on 08 January 1958.  She made her first vows in the Mission Congregation of the Servants of the Holy Spirit (SSpS) in 1987 and final vows in 1994.  She was a medical doctor with specialization in tropical diseases.  She has worked as a missionary in Ghana.  She served as Provincial Leader of the Province of Slovakia from 2004-2010.  Upon completing her term as Provincial Leader, she was assigned to Yei, South Sudan in 2010, thereby pioneering the SSpS mission in that place.  From 2010 to 2016, until her death, she has served in various capacities as SSpS community leader, medical doctor and Director of St. Bakhita Health Center, Yei.  Sr. Veronika was a committed, generous and joyful missionary, as well as promotor of human rights and dignity as a member of VIVAT International.

Around midnight of 15 May 2016, Sr. Veronika was returning, after taking a patient on an emergency call to Harvest Hospital, Yei, when she was attacked by suspected group of soldiers.  The St. Bakhita Health Center Ambulance that she was driving, was shot several times and Sr. Veronika was gravely wounded on the hip and in the abdomen.  After two surgeries in the Hospital for Women and Children in Yei, she was airlifted to Nairobi Hospital in Kenya on Monday 16th May for further treatment and surgeries. Despite the best efforts of the doctors, she passed away on Friday, 20th May 2016.  Her death is an irreparable loss for us, for her family and for the people she served especially in Yei.

VIVAT International thank Sr. Veronika for her dedication for people in South Sudan. We inherit her good will, continue our work for South Sudan together with local people.