Seven of VIVAT members participated in the UNPFII from 22 April to 3 May 2019 that focused on the theme “Traditional knowledge: Generation, transmission and protection”. 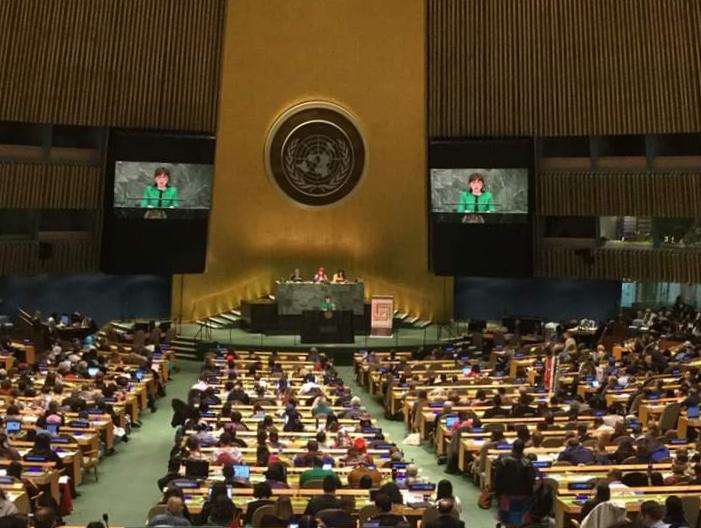 Regional Dialogues were also a part of the Permanent Forum for highlighting the relevance in the countries of the regions and sharpen the focus and impact of the Permanent Forum’s analysis and recommendation.  looked at the issues raised during the first week of UNPFII; to seek inputs of the Indigenous Peoples, Member States and UN systems to enhance perspectives for facilitating consensus building, and to identify the emerging and thematic issues for future sessions.

VIVAT International organized a side event, “Protecting traditional knowledge: National and Grassroots Experience”.  This event was cosponsored by four UN NGOs. The panel consisted of four resource persons, three of whom were, VIVAT members, namely Sr. Sesilia Anak Agung and Fr. Fransiskus Lake from Indonesia, and Fr. Nicholas Barla from India. The focus of this event was to share the good practices from the local communities in generating, transmitting their traditional knowledge, and the challenges and opportunities they face in preserving it; and to highlight global and national policies, programs and mechanisms in protecting and promoting traditional knowledge.

Sesilia brought her experiences from the women empowerment programs in West Timor and shared on how women have promoted traditional knowledge as entrepreneurs. Through PowerPoint presentation she showed various handicrafts and dresses that women have produced. Fransiskus highlighted the Traditional Knowledge of Dayak People in Protecting Environment (Forest, water, land, biodiversity, etc.) based on his experience. Nicholas based his presentation on the traditional language to build solidarity among the indigenous communities by citing examples of local level initiatives. Roberto Borrero, who has worked on the rights of the Indigenous peoples at the United Nations for over a decade, shared his experiences of the UN Declaration on the rights of the Indigenous Peoples and called forth for a consistent response by civil society in protecting Indigenous Peoples’ Rights in their territories, identity and the traditional knowledge systems..  The participants interacted with the panel. The event was brought to close with a   traditional dance of the West Timor.

There are several ongoing initiatives as highlighted by the panelists. There is a great need for local and global focus on the rights of the indigenous peoples to their rich heritage, traditional knowledge systems, identity, land and territories. Micro level efforts must be backed up with sound policies specially in today’s context where the indigenous peoples in many countries are denied their right to land and their unique cultural systems are threatened.  At the UN level the Declaration on the Rights of Indigenous Peoples has scope; however, they would yield positive results only when enactment of sound policies and their implementation are done at national and regional level. At the ground level more and more initiatives must be built up that would promote traditional languages, and knowledge systems pertaining to health and way of life. Documentation and dissemination of good practices is a strategy.  Civil society organizations need to constantly engage with their governments at every level.  Finally, there is a need to develop a system at local and national levels to transmit traditional knowledge to younger generation.

Statement of Support to Cimi on Indigenous Peoples and the Amazon

VIVAT Brazil made a statement to support Cimi Declaration on Indigenous Peoples and the Amazon.  It expresses its solidarity with those affected by the burning of the Amazon Rainforest that destroyed lives of the creation [read…]

VIVAT International, together with Franciscans International, the World Council of Churches and Geneva for Human Rights with support of the International Coalition for Papua, Tapol and Westpapua-Netzwerk, submitted the joint oral statement on “West Papua [read…]

Voices of indigenous peoples must be heard on issues affecting them, UN rights body told

17 September 2014 – The voices of indigenous peoples must be effectively heard and they must be consulted on issues that affect them, including rights to land and resources, the United Nations Human Rights Council [read…]