From 7 – 12 October 2019, over 40 participants gathered in Dili, the capital of East Timor (officially: Democratic Republic of Timor Leste), to attend the Universal Periodic Review (UPR) workshop organized by VIVAT International. Most of the participants are the members of Catholic Religious Communities based in Timor Leste and belonging to VIVAT International. There was also a number of delegates from NGOs and the JPIC diocesans commissions. 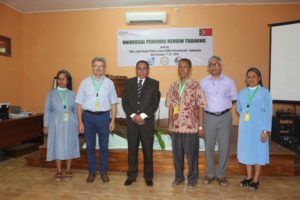 This workshop was the positive response of VIVAT International to the request from the VIVAT Indonesian branch to help them be engaged in the UPR process in Timor Leste and Indonesia. VIVAT members and other partners on the ground, in Timor Leste and Indonesia, are willing to be involved in this process. Fr. Andrzej Owca, CSSp, VIVAT representative from Geneva was responsible for preparing and conducting the workshop, and Brother Tino, from Edmund Rice International, was invited to be part of the process.

One could ask: what the Universal Periodic Review is (UPR)?

The UPR is the United Nations mechanism, which reviews the human rights records of all 193 UN Member States. It also gives all States an opportunity to present to the Human Rights Council what actions it has taken to improve the human rights situation in their State. In addition, it gives also the UN a chance to address human rights issues and to help States deal with human rights challenges and reminds States of their responsibility.

To begin, we clearly laid out some objectives, which were very helpful for the participants in the workshop process. We intended that the participants would gain knowledge about the UN system and the HR mechanisms, with a special focus on the Universal Periodic Review. We also hoped that they would understand the role of the Human Rights Council in Geneva and become familiar with the UPR process.

At the heart of the process, is the role of civil society in raising awareness and promoting human rights at the national and international level (UN) by engaging with the UPR process.

One of the most fruitful inputs during the workshop was the visit of the Minister of Justice of Timor, Mr. Manuel Carceres da Costa who visited us twice. As a learning process, his second visit was very important when he participated, as a panelist, in one of the panel discussions. All participants became aware that in the UPR process and human rights approach, the government is our partner and we have to learn how to engage and collaborate with it.

The third UPR cycle of Timor Leste will take place in 2021 and the UPR report from civil society should be submitted at the beginning of 2021. We are expecting to hear about the next step from the Timor Leste group.

A big THANK YOU to the Organizing Committee who did a great job and everything was foreseen and prepared. Thank you very much.