A member of the Congregation of the Sisters of the Holy Cross,  president of the Institute Land, Labor and Citizenship-ITTC, and a lawyer for the Brazilian Bishops Conference for indigenous populations.  She is also a representative of the Conference of Religious on the State Commission for the protection of victims and witnesses, a member of the executive team of VIVAT International- Brazil and a consultant for various social movements and Church groups.

Violence against women, and in particular domestic violence, is the fruit of a patriarchal culture.  Brazil’s culture is extremely patriarchal as well as subject to structural racism.  Other factors such as ethnicity, the presence of violence in general in the society and social and economic inequalities increase the situation of risk and vulnerability of women.  All of which are present in the Brazilian society.

In this setting, I would like to share with you some statistics about violence against women in Brazil and then speak to the question regarding the relation of the imprisonment of women and domestic violence.  Brazil places fifth in the world ranking of femicide according to UN data.  Only Salvador, Columbia, Guatemala and Russia have more women victims.  During the COVID-19 crisis, we have all been told to stay home.  Nevertheless, staying at home is a problem for those women who are part of the 42% of women who indicate their homes as the main site of aggression and fear.

According to the Brazilian Ministry for Women, Family and Human Rights, during March of 2020, the number of cases of domestic violence reported to the authorities increased by 9% compared to the same month of 2019.  The number continues to increase as our situation worsens.  In Brazil, every two minutes, a woman is a victim of domestic violence.  Even though Brazil has some specific legislation that supposedly protects women.  One of the pieces of legislation is the Maria da Penha Law, named in honor of a woman who was a victim of violence. This law treats various questions regarding domestic violence, including setting up special courts to treat the question and legal measures to protect women.

Femicide, defined in the Brazilian law as the murder of women and girls as a result of gender or discrimination because of the feminine condition, is a crime in Brazil whose sentence can range from 12 to 30 years.  However, as we all know having good laws doesn’t mean that they are always applied which is a reality in Brazil.  It is in this context that I would like to speak about the relation between domestic violence and gender-related violence and the imprisonment of women.

The Land, Work and Citizenship Institute, of which I am one of the founders and president, carried out extensive research on women incarceration in Brazil in the year of 2017. This research, called “Women Without Prison ”, identified a common profile for the women captured in the Brazilian penal system:  they are women that are black, poor, young, low schooled, residents of regions with few public services available, mothers, and many of them have their trajectories marked by domestic violence and the performance of double working hours. These women can also be drug dependent or may suffer from a mental health condition. Data from organizations, such as the Prison Reform Trust, show that more than half of the women in prison have suffered domestic violence.  It is in this situation that they are arrested for predominantly nonviolent crimes and the vicious cycle of victimization with the newly added criminalization is perpetuated.

Women are more liable to commit crimes because of their relationships or because of socio-economic issues.  In my experience with women in prison in Brazil, the majority of them tell that they committed crimes in order to guarantee food for their children, or to support their own drug consumption or that of their partner or as the result of promises for a better life from their traffickers.  It is difficult for these women to trust the police as an institution when the Brazilian Police are historically known to be violent, especially against black and indigenous people.  Because the criminal justice system reflects the Brazilian society, it is rare that they will encounter a judge who will take into consideration their individual situation in applying a decision to convict for any type of crime.

In another research done by the Land, Work and Citizenship Institute in Brazil, judges were cited as having made statements inferring that because a woman had supposedly committed a crime (found with drugs) in the presence of her children, it was impossible for her to be a good mother.  But thirty years of working with women in prison has taught me that many of them are in prison just because they wanted a better situation for their children!

As a rule, Brazilian prisons do not offer a woman an opportunity to deal with the consequences of the violence that she has suffered but because of the patriarchal structure only increases the consequences.  Also, if they are released to serve time on the street, there are no programs to help them to avoid a new situation of domestic violence and other violence, especially because after they leave prison they often return to their homes and the same situation that they were in before.  If they leave prison under house arrest, the situation can be even worse.

I believe that this is an area that the United Nations Commission on the Status of Women should address.  The number of women in prison has been increasing not only in Brazil (over five hundred percent in the last fifteen years) but throughout the world.  And in particular the number of women who are being involved in international drug trafficking as “mules’ ‘ also has been increasing throughout the world.  These women usually are lured into the situation through relationships that prey on their vulnerability or economic situations.  Many suffer physical violence in order to guarantee their compliance.

The Commission on the Status of Women could call attention to the Bangkok Rules on the treatment of women in prison actualizing them to increase suggestions of helping women to deal with their situation as victims of violence while imprisoned. 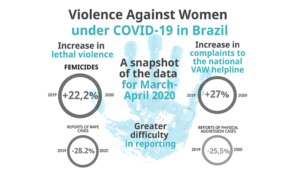 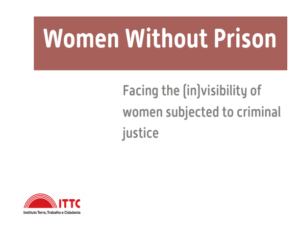 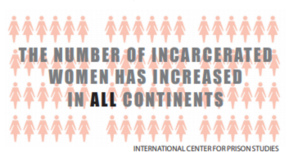 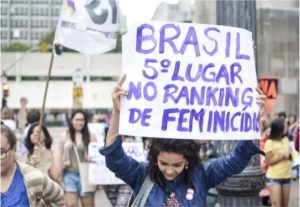