South Sudan is the world’s youngest country. Recently, the nation completed ten years of independence. South Sudan ranks behind Syria, Venezuela, and Afghanistan, with 2.2 million refugees. Most of them fled to neighboring Uganda, a tiny nation that takes care of 1.4 million refugees, only behind Turkey and Colombia as countries hosting the highest number of refugees. Since April, I live in Maban County in the Upper Nile State of South Sudan. It borders the Blue Nile State of Sudan to the east. It has a population of approximately 60,000 people, with ethnic Mabanese people comprising the majority. It also has a small Dinka community in the west and northern part of Maban and a Nuer in the south.

The Blue Nile State in Sudan is rich in fertile soil and minerals. It is in this State the Blue Nile River enters Sudan. As elsewhere in the continent and many parts of our world, everyone wanted a share of Blue Nile’s rich agricultural and grazing fields, mineral resources such as gold and chrome, various natural resources such as forestry and Nile water. Frequent conflicts and competition to access control these resources between indigenous tribes of Blue Nile and others can be traced back well before 1956, when Sudan became an independent country. After independence, these resources fed the political elites of the north in revenues, hydroelectric power, and industrial-scale gold mining to compensate the lost oil fields to South Sudan in secession. The socio-economic development of the natives was ignored, which included the largest tribe of Ingessana, Kadalo, Gumuz, Hamaj, Ragarig, Funj, Keili, JumJum, Uduk predominantly a Christian group, Burun, Koma, and Ganza.

The Khartoum government encouraged new groups of Arab origin to occupy and settle on this fertile land to exploit its natural and mineral resources. As a result, Sudan People’s Liberation Movement/Army was formed in 1983 to counteract such cruelties and exploitations. Sudanese Armed Forces regularly carried out aerial bombing and shelling of rebel positions and civilian villages, resulting in the collapse of social services, health, and education, forcing them to flee to neighboring countries. “Two Areas” is how this struggle is sometimes called (referring to South Kordofan and Blue Nile resistances) as they historically identified themselves with Southern Sudan and fought as a united SPLM/A force in the decades-long liberation struggle. Nearly 800,000 people lived across the Blue Nile before the conflict. Now, only 40,000 to 60,000 live there.  In March 2017, the SPLM/A-N split into two competing factions. It divided the population along ethnic and tribal lines. Communities that coexisted became highly vulnerable, especially those living in rebel-held areas and refugee camps.

There are currently four major refugee camps in Maban County. They are Kaya, Batil, Gendirasa and Doro. They host over 141,548 refugees from Sudan’s Blue Nile (BN) State. Though all are hailing from Blue Nile State, they carry their bitter ethnic divisions, creating a vast gulf between those in Doro camp and those living in the other three. The majority of refugees arrived in 2011 and rapidly outnumbered the Mabanese host community.  As a result, there has been sporadic violence between the refugees and the host community over competition for limited resources in cutting down trees for firewood, grazing land for livestock, and land for farming and access to employment.

In 2019, approximately 2,000 youth forcefully entered the UNHCR compound and those of 14 other aid agencies in Maban, resulting in looting, arson, destruction of vehicles, structures, and other humanitarian assets and lifesaving supplies of medicines. It was a protest over NGO resources benefitting only the refugees, NGO hiring practices, and lack of employment opportunities for the local community that turned violent. Since then, various proxy militia groups operate both in the camps and in the local community that works upon unaddressed political, social, and economic grievances but are supported by government fractions on both sides of the borders.

It is in this highly challenging and complicated environment the Jesuit Refugee Service (JRS) is working. Service is provided in the areas of psychosocial care services and education. Most refugees are Moslems. JRS conducts various psychosocial capacity-building programs in the camp for youth, women, and men and home-based counseling help through home visitation. For young babies with physical challenges, regular physiotherapy is provided. Everyone has stories of multiple losses and trauma experienced. Therefore, providing care, compassion, and support is an area in which I am fully involved during the weekdays. Another significant commitment of JRS is providing educational opportunities for children and adults. It also includes a teacher training program conducted at Arrupe Learning Center at the JRS compound itself. I do pastoral work during weekends as the Catholic communities in the surrounding areas have been without a parish priest for many years because of the ongoing conflicts. This area falls under the Archdiocese of Khartoum in ecclesial jurisdiction.

There are over 50 centers scattered all over but often not accessible due to floods and conflicts.  A team of catechists accompanies people in their faith journey. There is a Jesuit priest from Kenya working full-time pastorally. Above all, the presence of the religion gives a unique identity to JRS as a faith-based organization different from other NGOs active in the area. It has delivered us protection and safety during conflict and violence without significant damages to our property and injuries to the personnel. This is how JRS is living its mission here in Maban, South Sudan. As a Catholic organization inspired by the compassion and love of Jesus for the poor and excluded, JRS commits to accompany, serve and advocate for the rights of the refugees and other forcibly displaced persons. 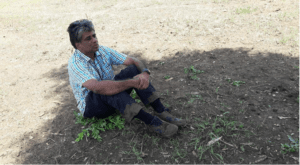 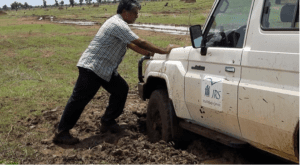 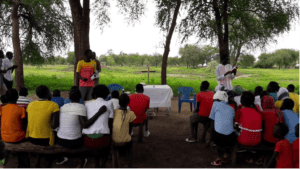 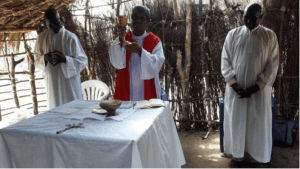